Sergio Aguero was a deadly goalscorer in the Premier League, but Manchester City did not hit the heights in the Champions League.

Sergio Aguero needed Lionel Messi to tell him why he was being continually overlooked for Ballon d'Or honours.

Despite scoring a record 260 goals for Manchester City, Argentine striker Aguero has never come close to winning the trophy that Messi has carried off six times.

Being repeatedly overlooked began to trouble Aguero, but when Messi spelled out what he was lacking, it all made sense.

Now at Barcelona, Aguero looks back on his City career and appreciates why his feats fell short of making him a major contender for a prize Messi has won more than anyone else.

"Many times I thought about what was missing," Aguero told Spanish newspaper El Pais. "And one day I asked Leo. He told me that to have a chance to win the Ballon d'Or I had to win the Champions League. And he is right.

"The subject of trophies with the national teams is also important. Take [Fabio] Cannavaro's case, for example, when he won the World Cup in 2006."

"I played great seasons, scored many goals and won many titles," Aguero said, "but I was not in the Champions League final. And last year when we reached the final, I had a knee problem, COVID and different injuries." 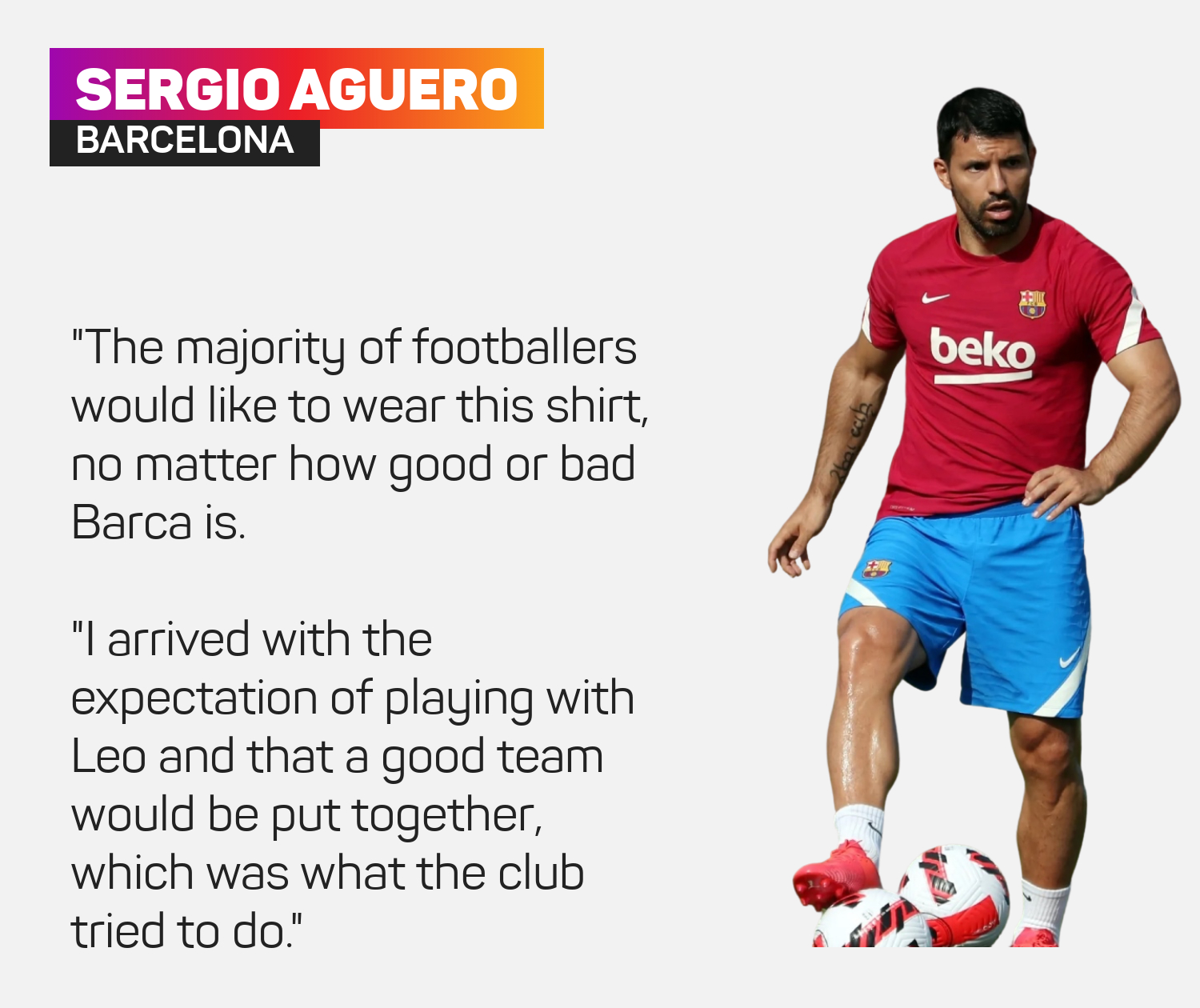 In 10 years at City, Aguero hit at least 20 Premier League goals in a season on six occasions, and only in one campaign (2012-13) did his minutes-per-goal record in the competition creep above one goal every 140 minutes.

Aguero has recovered from a calf injury and on Wednesday he featured in a training game for Barcelona against UE Cornella, meaning a competitive debut could be just around the corner.

It remains to be seen whether Aguero will be fit enough to play a part in Sunday's LaLiga match against Valencia, as Barca look to get their season on track.

A home fixture follows against Dynamo Kiev in the Champions League; then comes the first Clasico of the season, with Real Madrid visiting Camp Nou on October 24.

Long-time Argentina team-mate Messi was at Barcelona when Aguero arrived, but he has since departed for Paris Saint-Germain.

Aguero recalled visiting Messi when it emerged he would be forced to leave Barcelona.

"It was a moment of shock. He was in a very bad way. When I found out I couldn't believe it. That Saturday I went to see him at his house," Aguero explained.

Aguero said he attempted to cheer up Barcelona's record goalscorer.

Now there will be expectations on Aguero's shoulders, and despite losing Messi, he says moving to Barcelona was the right choice once his City contract expired.

"Let's be honest. What player does not want to be at Barca?" Aguero continued.

"The majority of footballers would like to wear this shirt, no matter how good or bad Barca is. I arrived with the expectation of playing with Leo and that a good team would be put together, which was what the club tried to do. When they called me, I thought: 'I don't care what they pay me. I'm feeling good and I'm going to help the team as much as I can.'"

Dortmund will not whine about Haaland's absence, claims Rose

Erling Haaland is going to be out for several weeks with a hip flexor injury, and Marco Rose knows Borussia Dortmund will miss the striker.

Mikel Arteta has praised Arsenal captain Pierre-Emerick Aubameyang for what he is adding to the team beyond his goalscoring.

A dominant performance with bat and ball saw Afghanistan bring Scotland back down to earth in Sharjah.

Barcelona and Boca Juniors will play a friendly match in Riyadh to honour Diego Maradona, who died last year.

Stats Perform takes a look at a list of potential candidates to replace Ole Gunnar Solskjaer as Manchester United boss if he is dismissed.

Police confirmed that no action will be taken against Crystal Palace fans who raised a banner in protest at the Saudi takeover of Newcastle.

The Badminton Association of Malaysia (BAM) have made a big move by appointing Rexy Mainaky as their deputy coaching director to work alongside national chief  Wong Choong Hann.

After claiming a fifth ATP Tour-level title at the age of 20, Jannik Sinner spoke of his pride following his European Open triumph.

Manchester United's frightening defeat to Liverpool was in keeping with some pretty ghoulish memories of October in the Premier League.

Liverpool-linked Adeyemi not on the move in January, insists Salzburg director

Liverpool and Borussia Dortmund have both been linked with Karim Adeyemi, but Salzburg say he will not be sold in January.